Thanks to all the users of this tool, and your continous feedback. I always think that the most recent release will be the last, but I am already perparing for the next relase, which will add features like:

- Provision a 3.5 database for Sync Framework
- Ability to Migrate to a SQL Server/Express/LocalDB database in a single click (like what you can do with WebMatrix, but from within Visual Studio)
- Support for SQL Server Compact 3.5 connections with Visual Studio 11 beta (to support Windows Phone users and others)
- Option to add a ConnectionStringBuilder class to Windows Phone projects
- When exporting table data, the tables are now ordered topologically
- The Server based DGML files now respect schemas
- Server date and datetime2 columns are now converted to datetime

And in connection with the MVP Summit I got the opportunity to appear on the Visual Studio Toolbox show on Channel 9, where I demo some of the Toolbox features. Maybe you will discover features you did not know about during the demo.

Some Phone developers (see this forum post, for example) have encountered issues when moving databases from device to desktop and vice versa, when encryption is involved. In this blog post I will try to explore what can and cannot be done in this respect. 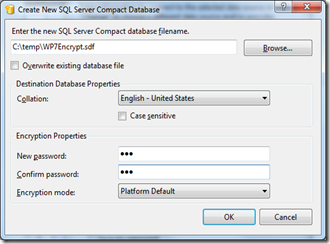 Specify a password of “zyx” and click OK. Now we have a connection to a desktop encrypted database file.

Open the SQL Editor, and create a basic table:

Now create a Windows Phone 7.1 Application, and add the database file from above as Content: 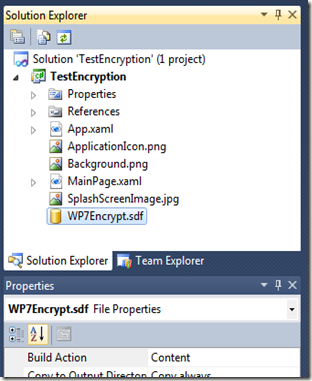 Right click the database connection in the SQL Server Compact Toolbox, and select “Add Windows Phone DataContext…” and click OK, the WP7EncryptContext.cs file has now been added to the project.

Add a reference to System.Data.Linq, and compile the project.

Add a button called “Connect”, and add a click event handler, with this code:

Now run the app in the emulator by pressing F5 (debug): 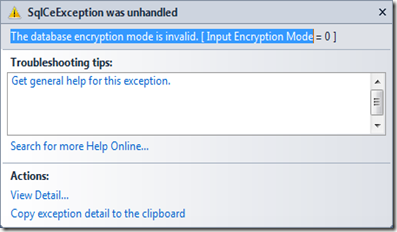 Obviously the desktop encryption is not compatible with the device database engine!

Now the database will be created in Isolated Storage on the device. Run with F5 again, and no errors will occur. And we have “pre-populated” the database with a single row. Let’s try to move this database file to the desktop, I use Windows Phone Power Tools from CodePlex to do this: 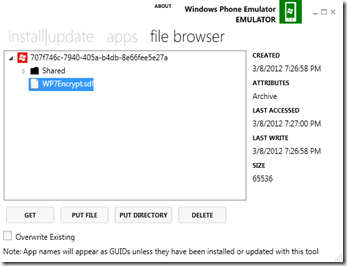 When you add a connection to the file form the device, and click “Test Connection”, you will get this error message:

We already know that some version 4.0 features have been made available in the 3.5 Windows Phone database engine, like support for OFFSET/FETCH to allow paging. Has the enhanced version 4.0 encryption also been move to the device?

In the Toolbox, select “Add 4.0 Connection” and try to connect to the database from the device: 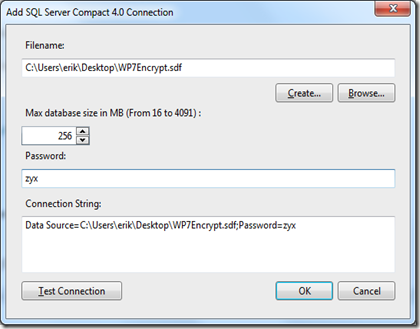 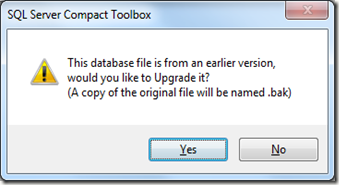 Reply Yes! And now we can browse and inspect both schema and data in the file – keep in mind that this file cannot be moved back to the device. 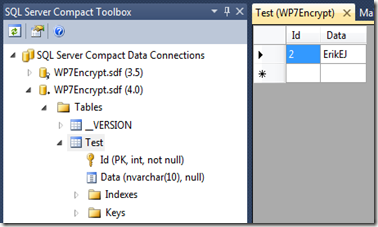 Now, GET the file again from the device via the Power Tools, and add the new copy to the project again, also as Content (as above, but the database file comes “pre-populated” from the device.)

Credits: Thanks to Marc-Anthon Flohr for prompting me to write this blog post. His overview is nice, although his conclusions are slightly different.

No blog post or KB article yet, I will update this post when they become available. I the meantime, I have skimmed though the code in the ADO.NET provider, which reveals the following changes (all is just guesses, and it is beta software, of course):

According to this thread, this bug has been fixed: Getting exception "The data area passed to a system call is too small." in SQL Server Compact 4