Microsoft recently released Visual Studio 2013 Community, a free, full featured edition of Visual Studio, has essentially all features found in VS Professional, expect some Office/SharePoint project templates, and is free for many scenarios (please check the licensing requirements). Previously, users of the SQL Server Compact Toolbox with VS Express had to use the standalone edition of the Toolbox. If you replace your Express edition with Community, this is no longer the case, as it supports all VSIX extensions from the VS Gallery / Extensions and Updates dialog in Visual Studio. A very bold move from Microsoft, and a major  boost for open source/hobby developers. If you have any questions about this VS edition, start by reading the Q&A here 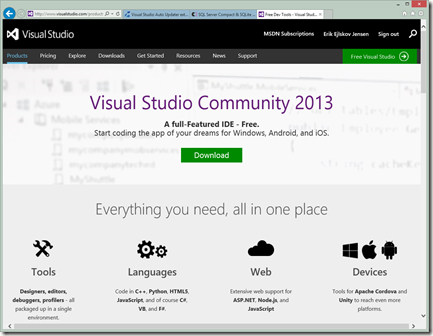 Mads Kristensen, a Microsoft Program Manager (and fellow Dane), recently released the “one extension to rule them all”, the Visual Studio Auto Updater extension. It allows you to specify which of your Visual Studio extensions you want to automatically update when a new version is released. I have submitted a pull request to have the SQL Server Compact / SQLite Toolbox included in the list of extensions that are always updated. Highly recommended, ensures that you Visual Studio installation is always fresh. 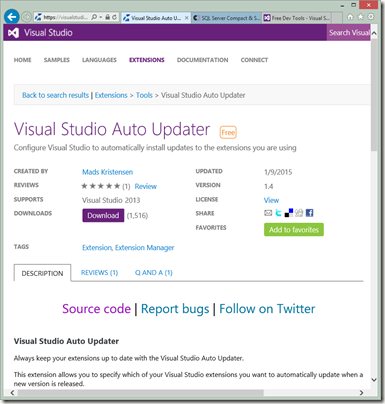 In early November last year I had the opportunity to appear on the popular Channel 9 show “Visual Studio Toolbox” hosted by Robert Green. In the show, I present the new SQLite support in the Toolbox. A good intro if you want to get started using the Toolbox. The next release of the Toolbox, version 4.2, is currently available in preview from CodePlex. The main focus for this release is a number of (overdue) improvements to the SQL query editor:

1: The editor now has proper “file” handling, with Save and Save As buttons, and the saved file name appearing in the tab caption.

2: Keyboard shortcuts have been enabled, allowing you to use F5 to execute queries, and use Ctrl+O to open scripts, and Ctrl+S to save scripts.

3: A button to export the current result as CSV (Excel) format has been added.

Try out the preview, and let me know if you have any suggestions or find any issues via the CodePlex issue tracker.