After more than 170.000 downloads, version 3.3 of my SQL Server Compact Toolbox extension for Visual Studio 2012 and 2010 is now available for download. This blog post is a visual guide to the new features included in this release, many suggested by users of the tool via the CodePlex issue tracker

In this release, the text editor used for the SQL Query window has been updated to use the AvalonEdit text control. The new control features improved syntax colour highlighting, also available during editing. In addition, the editor also enables search (use the new Search button on the toolbar), with hit highlighting: 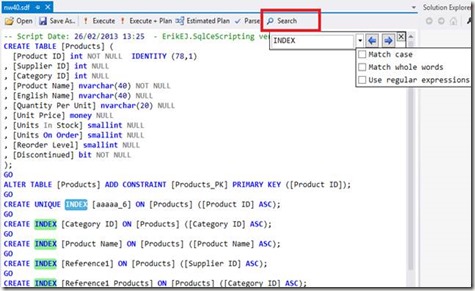 In order to support the fact that the Server Explorer is no longer available for version 3.5 in Visual Studio 2012, I have now slowly begun adding features from the SQL Server Compact Server Explorer Tools. The first is the maintenance options: Shrink, Compact, Verify and Repair.

In addition to synchronizing Merge Replication subscriptions, it is now possible to re-initialize a subscription, meaning starting over with a new set of data from the server, but retaining any local data. 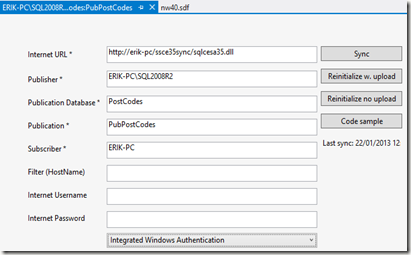 I've been using your tool since several months, and it has proven invaluable in my day to day development.
Thanks for this update and for your ongoing work.