After more than 210.000 downloads, version 3.6 (skipping version 3.5 to avoid confusion) of my SQL Server Compact Toolbox extension for Visual Studio 2013, 2012 and 2010 is now available for download. This blog post is a visual guide to the new features included in this release, many suggested by users of the tool via the CodePlex issue tracker

In order to improve the experience for Toolbox users, I have now started adding features to the Toolbox found in the Server Explorer tooling, starting with a Table Builder. This is due to the fact, that Server Explorer support in VS 2012 and VS 2013 is limited (in 2012 SQL Compact 4.0 only, and in VS 2013 none, where as Server Explorer in VS 2010 supports both 3.5 and 4.0).

To use the Table Builder, right click a database, and select Build Table: Then specify the columns to be built, and click Script! 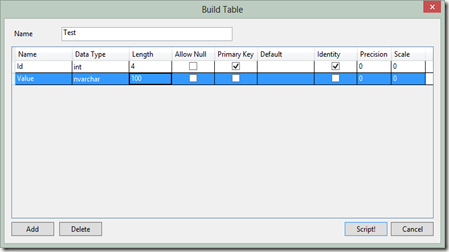 A CREATE TABLE script will then be displayed in the SQL editor. In the current version, it is not possible to modify an existing table, maybe next time?

You can now view the data in any table via the Microsoft Report Viewer, which also enables you to export data in Excel, Word and PDF format. 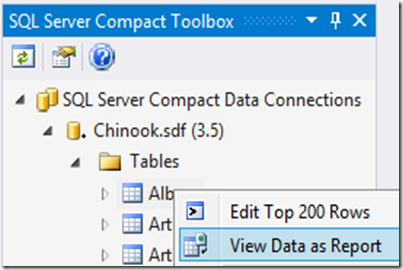 Right click any table, and select View Data as Report 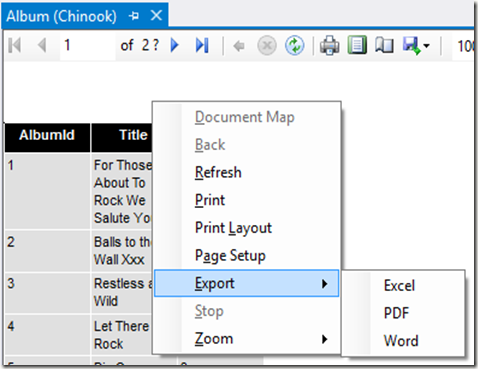 You can right click the report (or use the Toolbar) to Print/Export the table data.

This featured is based on this Stackoverflow reply: http://stackoverflow.com/questions/267091/best-way-to-view-a-table-with-lots-of-columns

This feature is very similar to the existing feature for Visual Studio 2010, allowing you to do Database First development with SQL Server Compact and Entity Framework 6. The new implementation for Visual Studio 2013 takes advantage of assets from the version 6 Entity Framework designer, this includes using the included .tt files to code generate a DbContext and related POCO classes rather than a legacy ObjectContext. To use this feature, first install the EntityFramework.SqlServerCompact NuGet package in your project, and the simply right click the database you would like to generate the model for: 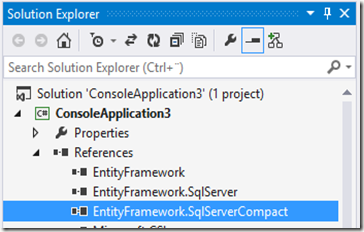 Then you will be presented with a very basic “Entity Data Model” dialog, which allows you to select which tables to include in the model, and to specify other relevant options: 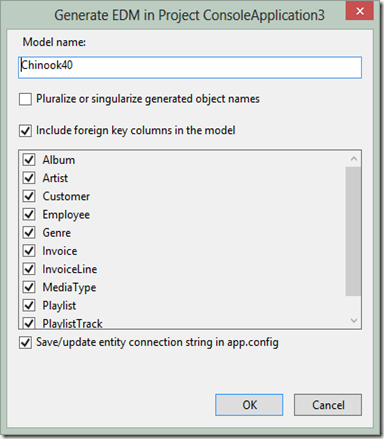 Clicking OK will generate an EDMX file and releated .tt files etc, in the project based on the Entity Framework 6 designer way of doing this.

I cannot install this on VS 2013, says it's incompatible

how to fix this?

You must have VS 2013 Pro, Premium or Ultimate to install 3rd party extensions. Upgrade, or use my standalone Toolbox app.

I have it installed in 2013, but cannot connect to existing sdf files- the options are greyed out.

Boomhauer: Install the 3.5 SP2 runtime, as the documentation states

2) I found no fix, so I just started the saùe operaton : Now it won't run, asking me to Build the pp first (which of corse I cannot do, due to previous issue.

I am just stuck there. I'll appreciate any suggestion to get out of this.
ReGards.
Georges

Georges: EF6 vb support is broken in version 3,6, pls download 3,7 Alpha from sqlcetoolbox.codeplex.com where this is fixed

Please, I'm using VS 2013 Ultimate and it happens the same that boomhauer says, so where do I finf these he mentioned:

Install the 3.5 SP2 runtime, as the documentation states

Because it appears many features deactivated and I read the docs it carries where it talks about something similar.

Hi, again. I solved the absence of Sql Server Compact 3.5 sp2, I downloaded from here: http://www.microsoft.com/es-es/download/details.aspx?id=5783
Just extract in your favorite folder and install both binaries (in x64 case is recommended both).
Finally, restart VS 2013 (any version mentioned before...)
Good luck.
Great tool.

Felix: Happy you got it working!

I'm thankful for SQL Server Compact Toolbox 3.7 as I'm in the process of migrating a SQLCE 3.5 database in conjunction with Entity Framework 3.5 (aka EF 1) using legacy ObjectContext within a C# project that got upgraded from .NET 3.5 to 4.5.1.

However, I came to a problem I do neither understand nor am I able to fix it myself: clicking "Add EDMX to current project" in order to generate the EF code opens the dialog for naming the model, but confirming it only results in the dialog being closed. No file(s) or code is added/edited and no error or warning is displayed.

Can you help me or point me in the right direction?
Thanks in advance!

Martin: There must be something special about your database schema, so the only way forward would be to email me a schema script or the sdf file.

Erik, thanks for the quick reply and sorry for being late with my follow-up.

But I was able to figure out the source of the problem: all tables had a primary key which was named "PK_ID".

It's no problem for your toolbox, because it just renames them "PK_ID" - and that's how I came to the root of all evil.

So I used your toolbox to drop them all (had to rename them within the script as the number was carried over, though) and then recreated each one in compliance with common SQL naming guidelines ("PK_ID").

So, thank you for your work, because it probably would have taken quite a bit longer without your toolbox.

Since the PKs are fixed now, the EDMX file was generated just fine.
After adding a repository builder for DbContext (for POCO) and configuring it, everything seems good so far.

But as a last question: In order to build the project correctly, I have to create a class for each repository so that EF can map between table data and program objects, right?

Martin:
1: I do not understand your solution, all the pk names look the same to me.
2: Once you add the EDMX, all required classes with be generated by the .tt files

Erik, that's my bad. I used angle brackets and it seems that Blogger removed them, because it tried to match them with HTML tags but failed to do so and therefore removed them.

The corresponding lines should be read like this (I used square brackets this time):
---
But I was able to figure out the source of the problem: all tables had a primary key which was named "PK_ID".

It's no problem for your toolbox, because it just renames them "PK_ID[number]" - and that's how I came to the root of all evil.

So I used your toolbox to drop them all (had to rename them within the script as the number was carried over, though) and then recreated each one in compliance with common SQL naming guidelines ("PK_[table's name]ID").
---

Regarding your second helpful advice, I'm totally confused now.
If you're right (and I do believe you are! ;)), then why do I get several compiler errors like this one:

"The type or namespace name 'Project' could not be found (are you missing a using directive or an assembly reference?)"

martin: Thanks, now it makes sesne. Re your issue: Maybe somthing with namespaces/pluralization, but I can probably best help if you send me a schema file, then I can try to repro.

Erik, thanks for your help so far.

Since the project is pretty much security-related, I'm not allowed to share data which isn't "abstracted" (like I did by naming the class "MyDataContext" or the property "Projects") with you.

I guess, I'm on my own trying to figure it out. Well, this is what happens if there's no refactoring on a software project at all and multiple developers touched the code, but left used frameworks untouched/without updates.. :-/

Hi Ahmad: To use .mdf you must install SQL Server Express on the clients PC. To use VS 2013, install my Toolbox, and most features you need should be available. Including several ways of moving from a SQL Server database to .sdf.