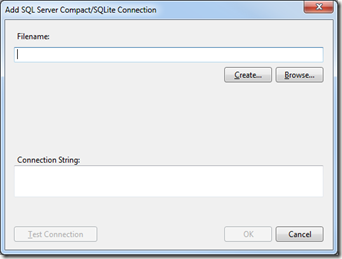 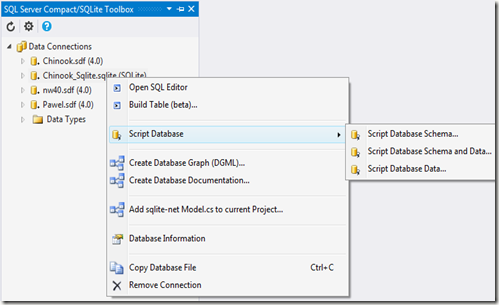 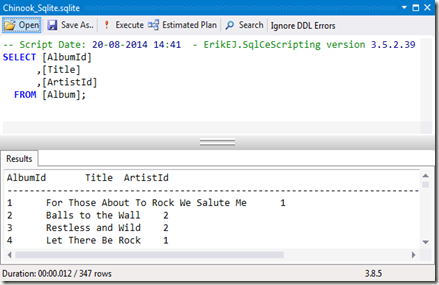 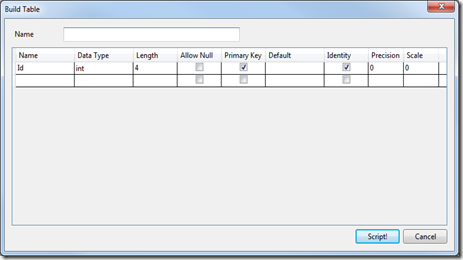 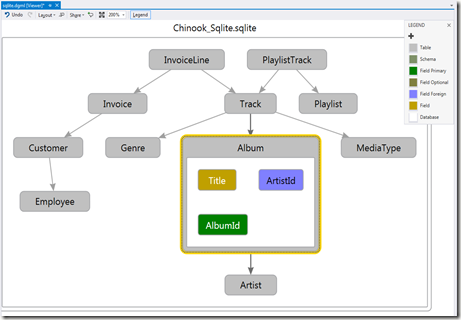 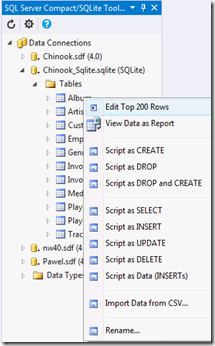 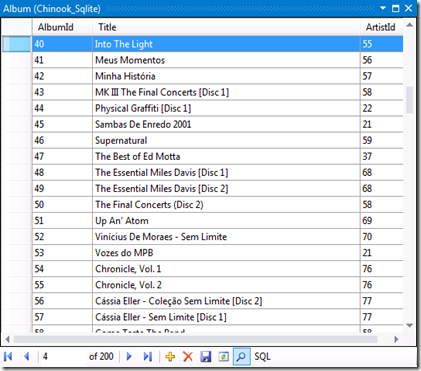 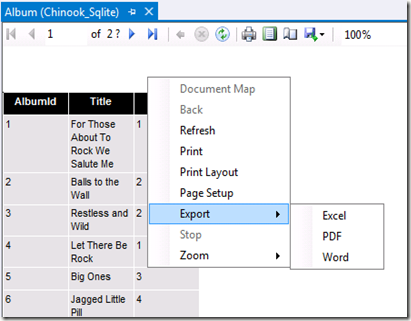 Is this tool also supports the SQL Server LocalDB?

Thanks for including Sqlite :) Will you also add "Add Entity Data Model (EDMX) to current Project" option for Sqlite?

Frank: glad you like it. I will investigate if it is feasible, the System.Data.Sqlite guy is also trying to make it Work...

I am using your standalone SQL Server Compact Toolbox for runtime 4.0 (great tool BTW!). I have a CE 4.0 database and have generated the LINQ to DataContext class using your tool. I added it to my Visual Studio 2013 Express project. Everything compiles fine, but when I run it I get an SqlCeException "Incompatible Database Version [Db version = 4000000,Requested version = 3505053]". It appears that it is trying to use CE 3.5 when my sdf file is 4.0. Can you tell me how do I make it use CE 4.0. I can't find how to specify the provider.

Plz what is sqlite connection string
how to create it

Gemo: Simply point to the file, which will result in a connection stŕing like: Data Source=c:\data\my.db

Trying to open a SQL CE 3.5 file i get this error when trying to add the connection:
"Format of the initialization string does not conform to specification starting at index 0.
Parameter name: value"
My Connection string looks like this:
Data Source=F:\TikkTakk.sdf

Hi, Dan.
No F:\ is an external USB drive.
My application is using it without any problem.

Actually I get the same error if i put it on D:\TikkTakk.sdf, AND if i set the connectionstring to point at a file that does not exist.
AND, the test is successfull no matter what...

Hi, again.
My mistake, I tried to add a new connection from the Server Explorer, not from the Toolbox...
When I tried to connect the way it is supposed to be done, it worked just fine...
Sorry for scaring you :-)

Hi,
I used your VS addin and converted SQL databases to .sdf files, but my primary keys are misisng - what am i doing wrong?

Hi Erik,
Thanks for the SQLite Toolbox. Helps me a lot in my project.
I am trying the following query:


The query is not returning any rows while running from SQLite Toolbox.
Later I open the database in SQLite Browser and run the query which return the records.
Can you please help me in resolving the issue.
Thanks & regards,
Omer

Omer: thank for reporting this, I have logged the issue here: https://sqlcetoolbox.codeplex.com/workitem/12203

Omer: This has been fixed in the latest "daily" https://sqlcetoolbox.codeplex.com/releases/view/616898 - pls let me know if it works for you

I have downloaded vsix the file but unable to install it from nuget package manager console. I placed the file in the e:\ drive and run the following command:
get-package SqlceToolbox.4.3.0.6

Before running this command I have uninstalled the current version of SqlceToolbox and changed the package source to E:\

Sorry, but I have never before installed the nuget package from console.

I double click the file but its not working. The is associated with Microsoft Visual Studio Selector. I am running Windows 10 Pro 64 bit.

Omer: if that does not work, I cannot help you further. What Visual Studio version?

Today I have downloaded the vsix file on another system with OS Windows 8 Pro and VS 2015 Community. The file installed successfully. The recursive query which I mentioned in my earlier post is now giving the same number of records as produced by DB Browser SQLite.
Thanks for your support.
Best Regards,

I've installed SQL Server Compact/SQLite toolbox version 4.4.0.1. When I right click a table and select the option edit top 200 rows, I am not able to copy an entire row and paste it at the end of the same table. Any help regarding this would be great.

Saba: I have logged a feature request here: https://sqlcetoolbox.codeplex.com/workitem/12292

Do you have a standalone version of your Toolbox (not looking for a VS extension here) that includes SQLCE 3.5, 4.0 and SQLite all in one ?

Eric: No, I have standalone editions for SQLCE 3.5 and 4.0 - for SQLite there are already a number of standalone tools https://github.com/planetopendata/awesome-sqlite

Hi Erik, Thanks for you nice tool.

I need to run SQL CE Toolbox Standalone on a client machine. Can you run, without installing SQL CE runtime into GAC? May be keeping necessary assemblies inside the same folder... Is there any possibility to do this?

Hi Erik, Thanks for your nice tool.

I need to run SQL CE Toolbox Standalone on a client machine. Can I run, without installing SQL CE runtime into GAC? May be keeping necessary assemblies inside the same folder... Is there any possibility to do this?

Dhanuka: I will make it possible! You can follow progress here: https://github.com/ErikEJ/SqlCeToolbox/issues/156

Dhanuka: Smaple zip available here: https://github.com/ErikEJ/SqlCeToolbox/issues/156 - pls let me knwo if it works for you!

Thank you so much Erik. It is working perfectly. Thanks again for your prompt response. All the best for your good work.

Hey Erik, I am working on a c# app using VS 2013 and Sql Server Compact Toolbox 4.0. I have created a database with some tables but I am unable to get the correct connection string.
Error:
An unhandled exception of type 'System.Data.SqlClient.SqlException' occurred in System.Data.dll
The function .Open() for connection doesn't work. Please guide me. A newbie here.

Yusra: Please ask in the Github issue tracker or on StackOverflow - you are using the wrong ADO.NET provider, but you need to share your code

Hi Erik, This tool is great. Off late I started to use a bit datatype and do not see any error while creating the table. I see errors while using Select top 100 menu or even creating the database diagram. I am on the latest version 4.7.534.0. Not sure if you ever come across this type. I can write a select statement and it works fine.
Can you please let me know if I missing something.
Thanks Sai

@sai: pls post an issue with more information on the GitHub repository, then we can work together to solve the issue